Here I am, sitting in the senior classroom at CRTS (don’t worry, class isn’t on). Around me are scattered piles of books – papers are due soon. It’s crazy to think that this will be the final wave of papers to swamp me here! It felt like just yesterday that, with great trepidation, I took a seat in one of these chairs, nervous about whether I could hold up under the pressures of seminary life. In hindsight, it turns out I should have been more trepidatious about the chairs themselves… I’ve broken three of them in my time here. 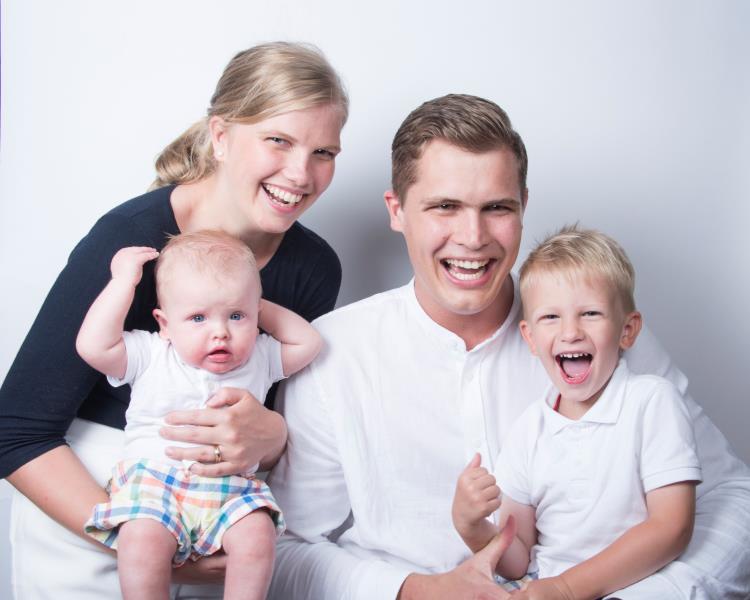 My name is Aidan Plug, and in the photo, you’ll see my beautiful wife Claire and our two boys, Austin (3) and Pierre (1). Claire and I both grew up in Western Australia and started dating during our undergrad years (Claire studied secondary teaching). Shortly after we were married, we packed our bags so that I could study in the hallowed halls of CRTS.

I can still remember the first time we set foot in those halls. Two doors down from the seminary we had found a house to rent, but it needed some painting. Thankfully, Claire’s family had come along to chauffeur us to Hamilton and everyone pitched in. I’m not sure how the professors got to know that one of their future students was causing a hullabaloo down the street, but they did, and invited us over. So we had coffee together, the Aussies covered in paint and the professors in their suits and ties.

Over the past four years we’ve come to know the people behind those ties—wonderful, godly men who have been a great blessing to us, not only academically but also spiritually. In fact, these years have really been a time of growth for us. Growth as people - moving to the other side of the world when you’re just married does that to you! Growth in knowledge. Growth in faith.

We have also been blessed with growth as a family. Our oldest boy was born during our first winter here. He’s Austin, our little thinker. There’s always something going through his mind, while his body struggles to keep up. Two winters later we were blessed with our second little man, Pierre. He’s our smiley one who had a rough start to life, but he’s remarkably happy. Pretty much all the time…unless you’re wearing a beard.

What else is there to know about us? My road to CRTS started in Grade 12 when my pastor sat me down and strongly suggested that I study for the ministry. Though he could be quite a fiery preacher, he was not as bold as Farel for there were no curses invoked on my studies if I stayed in Australia. Also, unlike Calvin, I did not have to make my mind up on the spot. However, after praying it over and thinking it through, I decided to give languages a go and see where God would lead. Well, the fact that you are reading this right now gives you an indication of where things have gone. Over the last eight years, God has filled me with a desire to serve as a pastor in his churches.

So here I am, sitting and staring at a room full of empty chairs. I am going to miss the guys that usually fill these chairs, as well as the friendships we’ve formed. If you’ll indulge me one more trip down memory lane, I can remember being a freshman at my first Thanksgiving dinner with the seminary crowd, listening to everyone debating covenant theology, throwing names like Berkhof, Berkouwer and Bavinck around as if they were football players. I almost took the next plane home. However, somewhere over the course of the past four years I have been turned into one of those men.

As Calvin would say, seminary is the place where wood is sharpened into arrows. Over the last four years our God has been whittling away, sharpening this one into an arrow for his purposes. Though a lifetime of further sharpening awaits, we are excited for our next phase of life, trusting that he will provide us with grace and strength to serve wherever he places us in his kingdom.