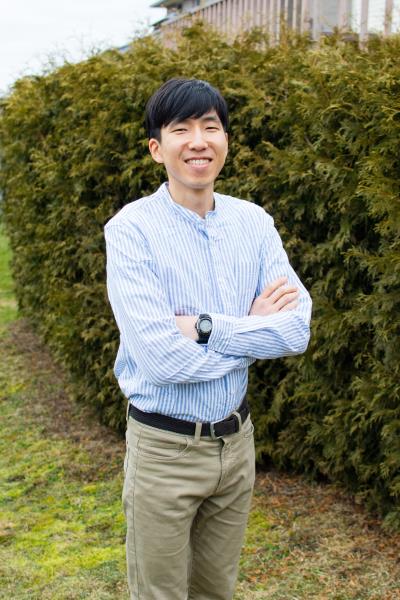 Hi, I’m Daniel Shin, a fourth-year student at the Canadian Reformed Theological Seminary. You might have already noticed that the seminary has a good number of international students and I am one of them. I am from Busan, South Korea. But that doesn’t do justice to my personal history because the Lord has blessed me with a diverse international upbringing. For instance, this is already my tenth year in Canada!

I came to Canada when I was seventeen to enrol in Credo Christian High School in BC for grade 11. After two years at Credo, I moved to Toronto (GTA) for university studies. I lived there for four years. Then I moved to Hamilton where I have been for another four years so that adds up to ten years. On top of that, I lived in Jackson, Mississippi, for a year, Potchefstroom, South Africa, for two years, as well as serving in the South Korean army for two years. Furthermore, just in case you didn’t notice from my picture, I am somewhat Dutch because, of course, I was born in Kampen while my father was studying at the Theological Seminary there. Since I’ll be twenty-nine soon, I have lived about half of my life in South Korea and the other half elsewhere. Maybe it’s easiest if I made a chart:

So, what am I like after experiencing all that? When I am not busy with work, I find spending time with family and friends meaningful. I love learning, so I listen to podcasts and read books. I love practicing and playing basketball. I also enjoy playing piano.

It’s hard to believe that I am almost done Seminary! I am sincerely grateful for the education which I received here. The internships were invaluable too. I had the privilege of being mentored by Rev. C. VanderVelde (first year), by Pastor R. Bultje (second year), and by Pastor W. den Hollander Jr (third year). These past four years have been an immense blessing: being encouraged by godly brothers, forming intimate friendships, being pushed toward excellence, and most importantly, knowing God more and more as we were immersed in His Word. I remember coming to the Seminary simply because I wanted to know more about God’s Word. But the Lord gradually worked in me a desire to serve in the ministry of the Word. As I am leading worship in the churches, the Holy Spirit is strengthening within me the desire to dedicate my life to whatever the Lord calls me. Lord willing, I hope it is the ministry of the gospel! Since the Lord has so lavishly blessed me this far, I look forward to what He has planned for me in the future.