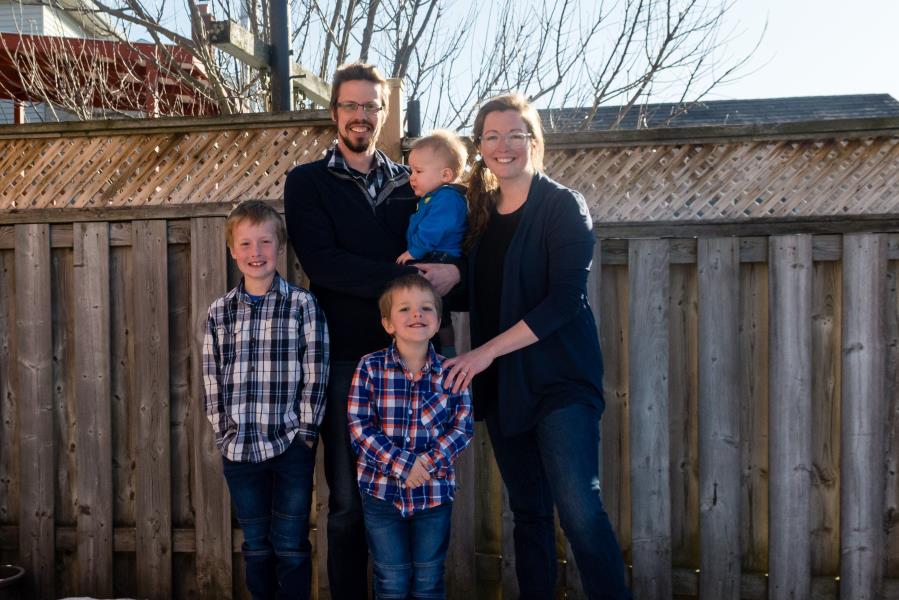 Hello everyone! My name is Raoul Kingma, and this is my wife Sara and our sons, Rory, Matthias, and Owen.

I was born and raised in the Niagara Peninsula in rural southern Ontario, spending my childhood romping through the forests and fields near our house. My dad was a butcher, and I spent many summers working in his shop, as did both my younger brothers. After high school, I went to university to become a mechanical engineer and later moved to British Columbia to finish my engineering education. During that time, I met Sara at Stepping Stones Bible Camp and was rather enamored. Because she lived in Alberta, that kicked off two years of us traveling between the Fraser Valley and the Edmonton area before we were married in 2012.

After I finished studying, I began work as an engineer in the Vancouver area and continued that for five years. As I transitioned into the workforce, however, I had developed a love for theology and a dear couple in our congregation suggested that I consider pastoral ministry. Over the next couple of years, I studied Greek, Hebrew, and Latin and we moved with our two boys in 2017 to Hamilton to attend CRTS.

Our time at seminary has been a rich blessing and time of immense growth, intellectually and spiritually. Being busy with God’s Word has worked it into my heart more deeply than ever. My love for the heritage of the Reformation has deepened. And my classmates and professors have sharpened me in more ways than I can count. Moreover, through summer internships, I was blessed to learn from the experience of several pastors – Rev. J. Louwerse in Hamilton, Rev. E. Watkins of Covenant OPC in Florida, and most recently from Rev. D. Wynia in Lincoln. As a family, we welcomed a third son in 2020, and have experienced the love and support of the communion of saints throughout our four years.

Yet this growth did not come painlessly. That was true on a broad level – seminary life, like everything else, was thrown for a loop because of the Covid-19 pandemic. But it was true on a personal level as well. As seminary progressed, I began to increasingly sense that the Lord was not leading my heart toward pastoral ministry, at least not at present. And so, after much reflection and prayer, I made the difficult decision not to go before classis after I finish. I hope and desire to use my training in other ways for the glory of God’s kingdom, although exactly what that will entail is not yet clear. That comes with its own challenges, but we rest in God’s providence as we look to the future, for although his providence may be inscrutable, it is always good.